Here is how to produce pedalboard for electric guitar. The idea is to connect pedals to the Arduino, and to use them to control a software of sound processing in Pure Data. Here I show you the example of a looper, but one can be also made a rack of effects without problem.

A video of the looper in action is available here :


First of all, something you must understand: our pedals break up into two parts: the controls part and the sound part. The control part is composed of:
The sound part:
The pedalboard are thus used only to control a software of sound treatment. 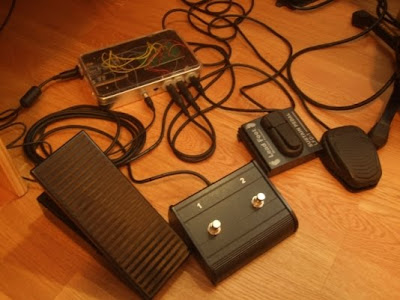 As it there is seen, my pedalboard is composed of (from left to right):
The assembly is simple: first, get the jacks catch which correspond to the pedals. Then, connect them on a small circuit which one even manufactures oneself. The idea, it is that each switch will be crossed by a 5 volts supply, provided by Arduino. Then, depending on the pedal state, the power is on (or off). With the pedal of expression, it is only a potard, which will modulate the power supply sent by Arduino.

Each pedal must thus be connected to the alim 5V provided by Arduino on the one hand, and to the mass of the other. Just put a resistance between the pedal and the mass: it is about a resistance of pulling. And here, connect the pines digital (or analogical for the pedal of expression) of Arduino, knowing the tensoin there and thus knowing if the pedal were actuated.

Close-up on the circuit


A close-up to see the circuit, but which does not show large thing. 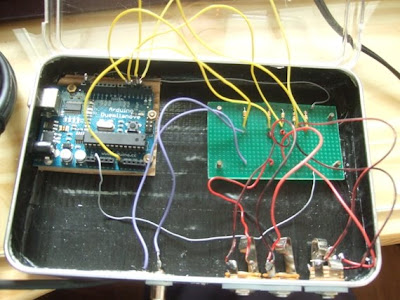 
Small diagram which shows that it is very simple. 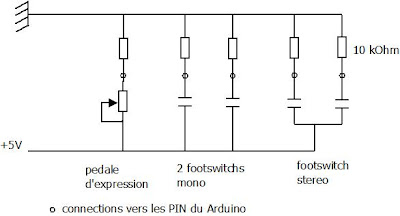 
Now that the assembly is made, we must write the short piece of code which one will embark on Arduino to manage all that.

Here also it is very simple: only the role of Arduino is to know the values of each switch (open/closed, 0/1) and of the potar (value between 0 and 1), and to send these data to the computer .

This code, one writes it with the kit of development provided with Arduino. For the communication between the chart and the ordi, one uses the lib Firmata, provided with the SDK.


See link below for the source code.


Comments on this code


Thus of course, this code corresponds precisely to the assembly which I carried out. But it is very easy to adapt to any assembly of the same style.

The use of the variables '' prev_… '' makes it possible to send data only when one of the values changes. As long as one does not touch with any pedal, the chart doesn't send anything. That avoids flood on USB port, and to tire the chart unnecessarily.


Well. All the part with Arduino is made. It is now necessary to make communicate our chart with Pure Data. For that, I used Pduino. It is a Pure Data object which is interfaced with Arduino. It requires to have used the lib Firmata on the embedded code.

Available at this address: http://at.or.at/hans/pd/objects.html
Once one manages to make communicate our Arduino with Pure Dated, one can start to program a small driver. It only handle simple tasks:
The Pure Data driver for the pedals is in the zip file (see following section), under the name arduino-driver-0-0-5.pd.


From there, one made all the part controls pedals. Remain the sound part. I will not extend too much on this part, which does not relate to really any more Arduino.


Note: I am a very occasional user of Pure Data (the last time that I served myself it of it was y' is 2 years old well), then if y' has people who know well and throw an eye with my patches, it can make them odd. I just made a point of preventing. I used quite ugly tricks, but I did not know how to do them differently.


The interest of this is multiple:

A new version of the source code is available on Gitlab for those interested:
https://gitlab.com/elboulangero/looper

Posted by elboulangero at 3:34 AM